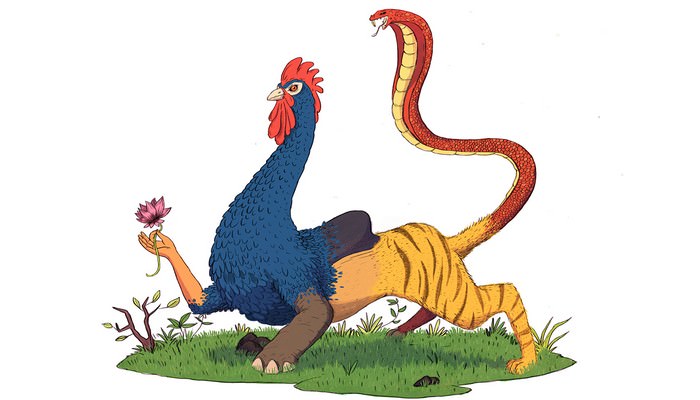 Animals have always been an important part of any mythology. The imaginative and hybrid characters have been associated with power, beauty, greed, humility, wisdom, cruelty and many other things. Many of the mythological animals are quite famous and have been used in modern literature. Dragons and unicorns are the best examples. Below are some of the lesser known creatures from Hindu mythology:

It is depicted as part of the lion, part of the elephant and part of the horse, and in similar forms. Yali sculptures are widely used on the walls and pillars of South Indian temples. It should have the power, ferocity and speed of a lion. Legend has it that Yali lurked in the jungle and feared no one. Therefore, it is formed at the entrance of temples and houses to keep the evil out. One of the popular stories of states that Yali of Narasimha Avatar was subdued by Lord Vishnu, one of the Holy Trinity.

It literally translates from water. Airavat represents an elephant with 4 trunks, is pure white in color and has wings. It came from the water, as the gods raved the oceans according to Hindu mythology. It is the vehicle of Indra, the god of rain. The eight cardinal directions have eight guardian deities in the myth. Each of them has elephants as a vehicle. Airavta is the boss of all elephants.

Makara is a Sanskrit word meaning "sea dragon" or "water monster". It is the vehicle of God Varuna, the god of water. Makara was portrayed as half mammal and half fish. It is also shown in some scriptures with the head and jaw of a crocodile, an elephant's trunk with fish scales and a peacock's tail. It has a place in twelve zodiac signs. Capricorn, the twelfth zodiac sign is Makara.

See also; 10 ridiculous demons from all over the world

Gandaberunda is an imaginary bird of Hindu mythology. This two-headed bird is said to possess magical power and can be seen in many temples across the country. It was first recorded in mythology when Lord Vishnu took the Narasimha Avatar to kill a demon, Hiranyakashpu. Narsimha became so powerful that the other gods feared total destruction. Then Lord Shiva, one of the Holy Trinity, took the form of a creature called Sharabha to control Narsimha. To confront Sharabha, Narsimha took the form of Gandaberunda. It became a sign of immense power. The rulers of the Vijayanagar kingdom adopted the emblem of this majestic bird, which continued throughout the centuries. It is now part of the official emblem of the Government of Karnataka, one of the states in India.

See also; 10 crazy gods and deities from all over the world

It has the head of a rooster, the neck of a peacock, the waist of a lion, the hump of a bull, the tail of a snake, the leg of a lion Elephant, another leg of a tiger, another leg of an antelope and a human hand holding a lotus. Navagunjara is the manifestation of God Krishna (conscience) in Hindu myth. It was used by Krishna to preach a doctrine of diversity to Arjuna, a warrior in Hindu myth.

It is a red partridge in Hindu mythology that feeds on moonbeams. He feeds all night and therefore happy but starved by day. It is said that he is a follower and obsessed with the moon. The connection of the moon and Chakora is used in many romantic folklore in the north of the country.

Ahi, also known as Vritra or Vitra, is a giant dragon in Hindu mythology. It is a drought dragon and a bad luck charm. According to the legend, Ahi once drank all the water on the earth and rolled around a mountain. The old god Trita, who was later replaced by Indra, killed this demon while sleeping with the thunderclap. So water was released and fertility and life restored.

Kamadhenu is a cow and is described in Hindu mythology as the mother of all cows. It is wonderful and offers everything the owner wants. Kamadhenu is often portrayed as the mother of other cattle. She is generally depicted as white with various deities in her body. All cows are considered the earthly embodiment of Kamadhenu in Hinduism.

Garuda literally means eagle. It has the head and wings of an eagle and the rest of a man's body. It is known a king of birds. Garuda has references in several well known writings like Ramayana. It is the vehicle of Lord Vishnu, one of the Holy Trinity. The bird is not worshiped independently, but with Lord Vishnu. He is portrayed in pictures as he carries Lord Vishnu back into the air.

In Sanskrit, "timi" means whale and "gila" means swallowing. Timingila is a gigantic sea serpent from Hindu mythology. It should be so big that it could easily devour a whale. It was mentioned in both Ramayana and Mahabharata.