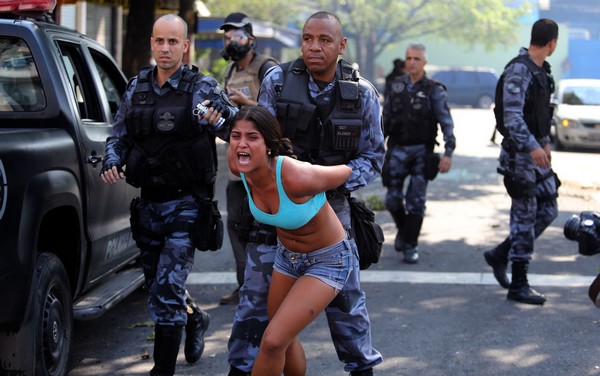 The police are the legislators of the society. Their job is to keep the situation under control, capture the perpetrators and control violence, but their job is not to punish. They are not the authority that decides which person deserves to be killed or punished. The police are accountable by law and constitution and they too can not take the law into their own hands. However, there are cases around the world where it is known that the police surpass their traditional role. Some forces have occasionally put a toe over the line, but others have taken many steps across the line.

The police were first formed by a Muslim caliph named Umar al-Khattab (R.A.). It was called "Ash-Shurta" at the time and was headed by a department head, much like the Supreme Inspector today. Their role was to keep the peace, but over time, the growing population and changing human psyche and their dynamics pushed the police from their fundamental role. Now the police are used as brutal force to control the brutality. Although it's pretty ironic, the police are also very important.

Below are ten countries with the worst police brutality in the world. I'm sorry to break your surprise, but Pakistan is at the top of the list. Continue reading …

Shocking as it may seem, but the US was listed here as the country with the most brutal police especially after 9/11. After the beginning of this war on terrorism, the police gave immunity in the country against legal and civil rights of humans (in a few cases unconstitutional). Lately, there have been many killings because the police "doubted" criminal activity. Innocent people are killed or executed following a biased trial because the police show impunity for civil rights in the fight against terrorism. Most murders are black men. The names of Alton Sterling, Philando Castile and Gregory Gunn are noteworthy when it comes to police killings. The country has the best police in the world! Surprised?

A look at the Ashura protests in 2009 gives you an insight into the extent of police brutality in Iran. The police and the authorities report 36 deaths, but the protesters claim the number is much higher. The Ashura is a tribute to a day of injustice in Islamic history. It is a day when Shiite Muslims are guilty of ending violence and injustice, but the police use brutal measures against people in Ashura processions. They were shot at, hit and shot at. The same thing happened in the protests against the elections in Iran. For that reason, there was widespread indignation in the country when a conference was organized against genocide against blacks in the United States. People thought it was ironic.

Brazil was on the news a few years ago because of the Olympic Games in Rio de Janeiro. It was also covered in the country because of the highest levels of brutal police brutality. It is common for police to kill people when they try to control mobs and illegal land occupation. They have a free ticket from the government to control the situation as they wish. It is also not uncommon for the police to use evidence to designate someone who they think is not good for society. There were also genocide and blacks. Nearly all reported deaths are self-defense. The problem is that the police are trying to control the brutality with brutality so that the gang war does not seem to abate.

Police brutality is common in Haiti too. One can judge the way the government turned the island of Ile a Vache into a tourist attraction. Instead of following the proper acquisition procedures, evacuation and development procedures, bulldozers simply pulled down houses and the police brutally dealt with anyone who crossed a certain line in the name of protests. The people were beaten indiscriminately because even pastors and women were not spared.

The police chief responsible for the region has been replaced by a stricter one to take action against the protesters against the government. It is very sad to see the taxpayers use the money for the police, and the same cost center is then used to put people under pressure illegally. Although this will appear to our readers as one side of history, there is ample evidence gathered by human rights activists about these protests in Haiti.

Kenya is an African country with widespread problems and widespread corruption. In 2016, people took to the streets against the government and its corruption. However, they were treated by the legislators with fierce resistance and punishment. Protesting crowds were hit with clubs and sticks. They were chased along the streets, and the police resorted to all cruel measures to disperse the assembled crowd. Journalists told anecdotes about how the police treated people as if they were cotton bales. No wonder people want change.

Killings in police custody and police violence in Russia are so common that little is reported. People tend to have the police take action to restore their authority and power. A recent famous case is the moderately successful band of drummer Sergei Pestov of the 1970s, who was arrested for alleged drug possession from his own garage. His wife had to identify his lifeless body the next day. And although the police claimed they had fired him last night, human rights activists think otherwise.

The Somali police, like the country itself, are in disastrous condition as a result of the civil war. According to reports, over 1,000 trained German police officers have disappeared and are said to have joined an Islamist militia in 2009. The troops are underpaid and resort to illegal measures to increase their income. In the country there is often raid of private property and bribery of citizens for bribery. There were also reports that the police turned away from crime and supported injustices against financial corruption. Attempts have been made to improve the state, but so far it has not been very successful.

In 2004, a CIA officer claimed that if a man was to be seen disappeared from this planet, he must be sent to Egypt. The situation worsened after the Arab Spring, as the current regime believes that the collapse of the overthrown Mubarak was the reason for his dismissal. Therefore, they plan to be different. According to the Nadeem Center, 600 tortures were reported in 2015, 40,000 arrests, 1,265 enforced disappearances and 267 killings. Much of this was done to support the aftermath of the military coup in favor of Sissi.

The number of people killed by the police in South Africa is increasing every year. If all civil actions against the police are upheld, the government's budget will be used up alone in court. Reports of police torture and rape by uniformed policemen surpass the figures each year. In 2016 alone, there were 244 deaths and 124 rape by uniformed policemen. It is annoying when the protectors become vultures. In the same year, 145 cases of torture were reported by the police.

The police in Pakistan are known for corruption and abuse of manners. It also stands for extrajudicial killings. According to the Pakistan Human Rights Commission (HRCP), a total of 3,345 people were killed in police operations between 2014 and May 2018. According to the police, 6,610 male and 23 female and 12 minor victims occurred during the period. Of these, 3,345 people were killed.

Numerous cases of extrajudicial killings by the police and brutality have been reported in Pakistan. Some examples like; Incident in the model city (14 protesters were killed by police unit), killing the model Naqeebullah Mehsud and more. However, the January 19, 2018 incident is by far the worst case of police brutality ever. Police officers from Punjab shot four people, including Muhammad Khalil, his wife Nabeela, 13-year-old daughter Areeba, and a neighbor from Zeeshan in the presence of three children.

What is most painful when parents are brutally killed in the eyes of their children? It happened. Three children see father, mother, and sister killed. The family traveled in a car when the alleged meeting, later called "Intelligence Operation" by CTD officials, took place on GT Road near Sahiwal. Previously, the CTD officials claimed that the four people were kidnappers. Later, however, they called them terrorists. Family members and witnesses said the police killed the four in cold blood and then tried to cover their actions.