It goes without saying that the Nazis had many crazy plans to serve their world domination plans. But not all of these plans included military skills or human genetics. One of them did not involve any people at all. A German pair of zoologists was commissioned to breed two long-extinct large animals.

The brothers Lutz and Heinz Heck started the extensive breeding of animals to bring back the aurochs and the tarpan, two super-sized giants – aggressive ancestors of modern cattle and horses respectively. Why? To restore the fame of ancient Germanic forests for future ultimate hunting sessions. So yes, they wanted to bring the animals back so people could kill them again.

Even stranger? The brothers thought of the project long before the Nazis even got in touch with them. This means that the Nazis heard of their plan and decided that he was crazy and terrible enough to fulfill their entire modus operandi so they gave the brothers the green light.

After 14 years, Lutz claimed to be successful in the "resurrection" of an aurochs. In fact, it was nothing but a new breed of cattle now known as Heck Cattle. They have an aggressive temper, but are only as tall as normal cows. NON-prehistoric monster cattle ?? BOOORIIIIING 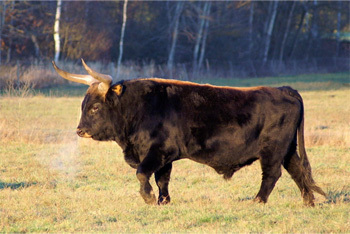 Walter Frisch What a load of bulls

Uh, as far as extinct animals go, it's still not as cool as the thylacine. Grab a copy of Tasmanian Tiger (Extinct Animals) today and show the next generation!

For more, check out the weird Nazi Tiny Tanks you never learned at school and check out this crazy 1890s nightclub.