The 7 most dangerous stunts of all time 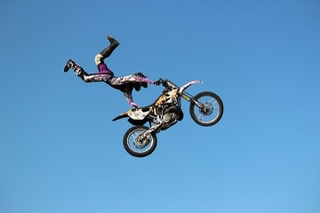 Roller coasters are enough adrenaline for most people. But there are some of us who want bigger heights, higher speeds and more freefall. The history of stunts is long, and self-styled daredevils are constantly trying to fight each other in search of new records. These are some of the biggest and most dangerous stunts ever attempted.

Luke Aikins set 2016 the record for the highest jump without parachute. Without a wingsuit, he dropped 25,000 feet, using only air currents to direct his landing. A 10,000-square-meter network of high-tech materials caught Aikins. To prepare for this jump, he made 18,000 parachute jumps. Source

Felix Baumgartner is best known for jumping from a helium balloon to the earth, which carried him into the stratosphere. He set the record at the time of the highest completed jump, at 24 miles and the fastest speed of 843 mph. An unexpected obstacle for him to complete the leap was the claustrophobia he experienced in the pressure suit needed to enter the stratosphere. Source

Philippe Petit a French daredevil walking on a tightrope between the twin towers of the World Trade Center. At the time it was called the "artistic crime of the century". Petit began planning the stunt a year before his performance in 1973. He used disguises to access the towers and take pictures. He and his friends hid equipment in the buildings the day before. On the morning of the 7th, he spent 45 minutes 1300 feet above the ground. Source

Nik Wallenda was the first to cross the Grand Canyon with a rope. The stunt took place in 2013. Wallenda wore no seatbelt and walked over on a 2-inch steel cable at a height of 400 meters above the ground. Nik has acrobatics in his blood, as a member of the Flying Wallendas, a circus family. Source