Breaking News
Home / Bizarre / For your Eyes Only 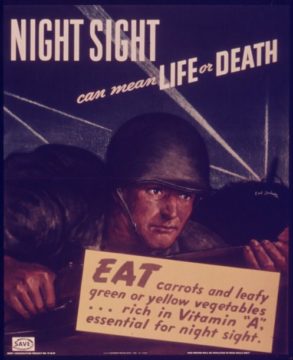 In the middle of World War II, the British Aviation Department began to publicly extol the virtues of carrot eating. The vitamin A from this vegetable greatly improved pilots’ eyesight, the ministry said, and enabled airmen to see enemy aircraft from a distance and at night. The newspapers have revisited these reports of strategic root vegetable consumption and indeed war statistics pointed to a sharp increase in the performance of British pilots in low visibility.

The belief that carrots are good for the eyes is still a widely held belief today. While they do contain vitamin A, a nutrient that helps keep eyes healthy, it turns out that the vegetables have a negligible impact on eyesight, even when consumed in large quantities. The Aviation Ministry purposely made up the story to prevent the Germans from discovering the Allied invention and the implementation of Airborne Interception RADAR units in their warplanes. This new secret technology was the real reason British pilots always seemed to know when German planes were approaching.