10 pictures of what children eat all over the world 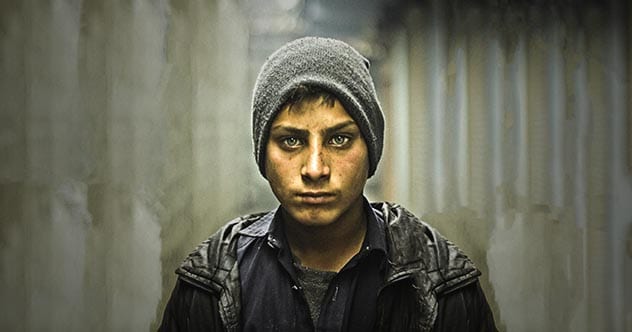 The diversity of world cultures can be seen in a unique way through the eyes of children. This list travels around the world, giving us an insight into the way we feed our future generations. It also offers a poignant view of the different living standards of today's world, especially from the point of view of our precious children.

See also: 10 pictures in which children sleep all over the world

Abdul is 10 and he loves kibbeh. There are over seventeen varieties in Syria's second largest city, Aleppo. Kibbeh is like a kind of dumpling made mainly from bulgur with a variety of meats, vegetables and spices. Life for children in Syria can be unbearable, with many living without shelter, food or clean water. Abdul is two years overdue for a life-saving heart surgery that he's unlikely to get. His family lives in a refugee tent city with sixty thousand others.

While Couscous is the final national dish in Algeria, Basem here shows his face hiding behind a mask of the Algerian flag. Shakshouka, a bowl of eggs, poached in tomato sauce. Algeria has a child mortality rate of 32% and at least 10% of children are not vaccinated. Children born out of wedlock are not protected by many laws.

Ukraine has a diverse range of national courts that are formally similar to those of many neighbors in the Soviet Union. A national dish is holubtsi, a cabbage roulade filled with almost everything you can imagine, although usually beef, lamb or pork is seasoned with garlic, onions and spices. It is a favorite of Artyom (aged 10), who still gets a headache from the shelling in 2014 and has to see a doctor several times a month to have his eyesight checked.

Aberto loves feijoada, a beef stew and pork stew. It is served with rice and sausages, which are sometimes cooked in stew. Children in Brazil often have to work (girls as servants and boys as workers) and almost 30% of the total workforce is child labor. Privileged children can go to school four hours a day.

Fragrance rice dish Kabuli palaw is the national dish of Afghanistan. But Neo, pictured here, prefers Sheer Khurma, a sweet dish of vermicelli, saffron, milk, sugar, nuts, dates, and rosewater. It is a festive dish of Muslim origin. The average salary in Afghanistan is $ 960 a month, and children (who are legally not allowed to work under 14) receive even less money to work in dangerous conditions.

Moambe Chicken is the national dish of the Congo. It is made by combining chicken, Congolese spices and palm butter (made from the fruits of the palm tree) into a thick stew. It is also a popular dish in Gabon and Angola. The Congo has a serious problem with child trafficking and child soldiers. If you were born like Dira in the Congo, there is a 75% mortality rate before you become five.

Chasin is thirteen years old and his parents are ultra-Orthodox Jews in Jerusalem. His family follows the kosher Lemehadrin laws, which are the strictest dietary laws in Judaism. Chasin's favorite food is Lokshen Kugel, a kind of creamy pudding or casserole of egg noodles and dairy products. It is an old Ashkenazi Jewish court.

Ji-seok is 10 years old and lives in North Korea. His father earns $ 1,000 a year, that's the average wage. Ji-seok Likes to chat online with friends, which is now possible with the government-approved Red Star operating system. His favorite food is Mul Naengmyeon, an ice cold noodle soup that is a specialty of North Korea. It is made from buckwheat noodles and slices of beef and pear meat.

Rubel is 12 years old and works in a factory where metal utensils are made. He earns $ 5 a week. He loves to learn at school when he gets the chance to go. Rubel's favorite food is fish curry (Hilsa), the Bangladeshi national dish.

This is James Charles. At sixteen, he became a YouTube star with a make-up channel. He lives in Los Angeles and is worth twelve million dollars. His favorite food (judging by his Twitter feed) is junk food – especially french fries!

Disclaimer: Some contents of this list are dramatized to protect the identity of the children.