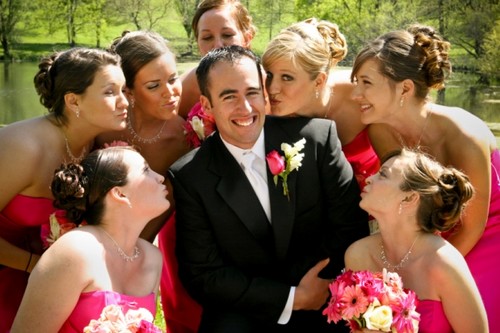 Wedding rituals and traditions vary greatly between cultures, religions, countries and social classes. Most wedding ceremonies involve the couple's exchange of marriage vows, the presentation of a gift (ring, flowers, etc.), and a public proclamation of the marriage by an authority figure. Many cultures have adopted the traditional western custom of white wedding (associated with the wedding of Queen Victoria), where a bride wears a white wedding dress and veil.

Marriage is a universal opportunity, in every culture it comes with a list of traditions and rituals, including the old rhyme, "something old, something new, something borrowed and something blue." It is one of the few similarities that countries around the world have in common. In many cultures, preparing a wedding means booking a venue, getting the wedding dress, and inviting guests. But with the following unusual and amazing wedding rituals it becomes clear how diverse weddings can be.

0 bizarre wedding rituals from around the world that go beyond the white dress and veil.

The Tujia in China prepare for a wedding 30 days before the wedding day. The bride spends an hour a day crying. Ten days later she is accompanied by her mother and then ten days later by her grandmother, and this continues until all the women in the family cry for one hour a day. Fortunately, it is not an act of sadness, but that is actually intended as an expression of joy and deep love. Because the women all cry in different tones, the collected sound sounds almost like a song.

No, not just between the bride and groom, in fact, as a guest, you might be lucky enough to put a kiss on the bride or groom. At the wedding ceremony, it is common for the groom to disappear during part of the ceremony for some reason, then all unmarried young men may kiss the bride. The same applies to the groom and the female guests, if the bride should leave the room. A unique Swedish tradition without a doubt.

One of the most bizarre wedding rites of the Maasai (Masai) nation of Kenya. At a Masai wedding ceremony, the bride's head is shaved and lamb grease and oil applied to her head. The father of the bride blesses his daughter by spitting on her head and breasts. Spitting is usually a symbol of shame, but in the Masai nation it is considered to bring luck and happiness. She then leaves her husband and does not look back for fear of turning to stone. The husband does not stay in the house where she stays for the next two days and then her mother-in-law shaves her head. This begins the wedding ceremony, which explains husband and wife for life.

Kumbh Vivah is one of the most amazing rituals of Indian spirituality. It is a process used when an Indian man and woman have a manglik intoxication. This is a wedding between a mangalik and either a statue of Vishnu or a peepal tree or banana tree. In some areas, Kumbh Vivah is an imaginary marriage of girls with a pitcher of water. According to some Indian astrologers, Mangalik Dosha has a negative effect on married life, which leads to tensions and sometimes the premature death of one of the partners. To cancel these effects, a Kumbh Vivah can be performed before the wedding.

Kumbh Vivah is like a normal wedding. A Manglik Dosh girl has to perform this ritual like the real wedding. She has to wear the bridal gown and jewelry together with a thread. Parents do Kanya Daan and "Phere" are also taken with the mud pot, all like a real Hindu wedding. Later, the girl has to change clothes, remove the thread and the thread is tied over the mud pot and the pot will later drown in a river or pond without anyone knowing about it. Once the ritual is over, the girl from Manglik Dosh is. She can now make the actual person happy and will have no further problems after the wedding. Bollywood actress Aishwarya Rai had such a marriage to a tree before she married her husband Abhishek

The ritual of "beating the groom's feet" takes place after the wedding ceremony in South Korea. The groom's friends take off his shoes and tie his feet together with a rope or a sash. Then they raise their legs off the ground and start beating the soles of their feet with a stick or dried yellow Corvina. Yellow Corvina is a kind of fish! It is believed that this will make the groom stronger before the first wedding night. It can be painful, but it's more fun than cruel. Actually, it's a funny tradition, the intention behind it is to check the groom's strength and knowledge. He is often asked and interviewed during the test. This amusing ritual has an important place in the Korean wedding culture.

. 5 The bride is wearing Above the threshold

The tradition of wearing the bride over the threshold is not a new tradition; it comes from centuries and has different origins. A common assumption is that this ritual began in medieval Europe, where many believed that a bride was prone to evil spirits by the soles of her feet. In order not to bring in evil spirits, the groom carried the bride to her new home. Even some ancient people believed that the bride must show that she was not crazy about leaving her father's house and was dragged across the threshold to her groom's house.

In some parts of India it is believed that spirits can inhabit certain people of the living world. Especially girls who were born with a milk tooth have already broken through the gums and girls who are very ugly or have a facial adjustment are possessed by ghosts. The only way to break this strange curse is for the girl to marry an animal, usually a goat or a dog. They manage a lavish wedding ceremony with alcohol and dancing. This is nothing but a pseudo ceremony and the girl is not expected to copulate with the animal. To repel the evil spirits, she can later marry a man.

. 3 The Ritual of Blackening of the Bride | Scotland

Blackening of the Bride is a very old Scottish tradition. It is part of a debris ritual that actually takes place before the wedding. The bride is taken by surprise, with hands the toughest friends one could have, and covered from head to toe with all kinds of crap. It can be anything from spoiled milk from the back of your fridge to tar and feathers. The ritual of covering brides and grooms in molasses, soot and flour was used to ward off evil spirits. It still happens in some parts of Scotland.

. 2 Kyz ala kachuu | The practice of Abduction of brides

Kyz ala kachuu, means "take a young woman and run away", is a pretty crazy ritual. It has been practiced throughout history throughout the world. The ritual is also referred to as "bridal abduction", marriage by abduction or marriage by capture. It is a practice where a man abducts the woman he wants to marry. The young man abducts a woman either by force or cunning, often accompanied by friends or male relatives. They take her to his family's home, where she is held in a room until the husband's female relatives persuade her to put on a married woman's scarf as a token of acceptance. It is said that the kidnapping of the bride is still practiced in some cultures, such as the Romani (known as Gypsy) and Kyrgyzstan

1. Money dance | Guests pay to dance with the bride

The money dance is an event at some wedding receptions in different cultures. It was founded in Poland in the 1990s. During a money dance, male guests pay to dance briefly with the bride, and sometimes female guests pay to dance with the groom. At the wedding reception, the bride will dance with her father while a relative extends an apron. Guests who put money on the apron gain the opportunity to dance with the bride. At the same time, the dance includes bridesmaids and other ladies dancing.

♣ 10 Bizarre traditions from around the world.
♣ 10 bizarre festivals in the world.
[1945 Top 10 most expensive divorces in history
♣ 10 things you can not do to your wedding.
♣ Top 10 Bizarre University Courses.