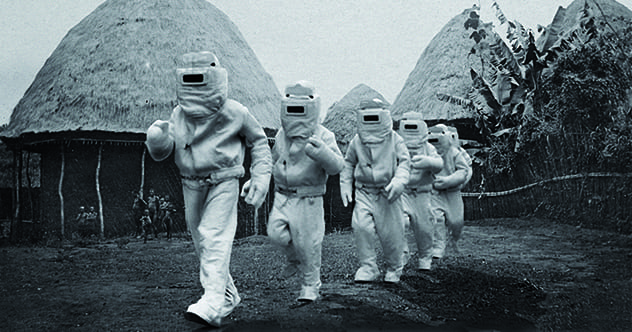 The space race was an intense confrontation between the United States and the Soviet Union. The undeclared contest began immediately after the Second World War, but ended after Neil Armstrong landed on the moon on July 20, 1969. The USA had won. It ended abruptly after the dissolution of the Soviet Union in 1991.

Zambia is a country you do not hear often about. It's a landlocked country hidden somewhere in south central Africa. In 1964, it joined the space race and planned to land a man on the moon before the US or the Soviet Union ever did. This was five years before Neil Armstrong entered the moon.

The Zambian Space Program was the private project of Edward Mukuka Nkoloso, a teacher and founder of the National Academy of Science, Space Research and Philosophy in Zambia. Mukaka recruited twelve prospective astronauts, including a 16-year-old girl named Matha Mwamba, for the planned moon landing.

Mukuka lacked funding for his space project. The Zambian government was not interested in a partnership, and the United Nations, the United States, the Soviet Union, and Israel had ignored its funding requests. Nevertheless, he continued to train his astronauts with an old drum that he had found.

The budding astronauts entered the drum, which was then rolled around a tree or hill to mimic the flight conditions. The astronauts also learned how to walk on their hands. Mukaka claimed this was the only way a human could ever walk on the moon.

The whole thing was so funny that international reporters started to regard it as a joke. Mukaka never made his intentions clear, though he seemed to be serious. He once said to an interviewer, "I'll laugh if I plant Zambia's flag on the moon."

The space program collapsed as the budding astronauts started asking for money. Two of Mukaka's best astronauts were also drunk and never returned to training. A third joined a film troupe. The program finally ended when the only astronaut trainee became pregnant. [1]

It all began during the space race. The US and the Soviets were such strong competitors that they could not agree on a name for spacemen. The US chose astronauts ("star sailors"), while the Soviets preferred cosmonauts ("cosmic sailors"). International astronauts hitchhiking on Russian or American spaceships identify with the term host country.

China also had a name for its astronauts when it began sending people into space. The original idea was to call them Chinanauts before settling for Yuhangyuan ("space navigator"). Taikonaut ("Space Sailor"), however, is more common since it ends with "naut" and is easier for non-Chinese speakers to pronounce. [2]

8 Children's playgrounds were designed to arouse interest in spaceflight

The space race was extended to playgrounds. During this time, the United States and the Soviet Union have developed school equipment to arouse children's interest in space travel. Playgrounds were built to mimic rockets, satellites, towers, submarines and even planets.

Space-inspired gaming machines in the US disappeared in 1973 when Congress established the Consumer Product Safety Commission. The Commission was concerned about accidents on playgrounds and asked toy manufacturers to develop safer devices. This saw surpasses the safety and convenience of the design.

A second strike was carried out two decades later when further guidelines demanded that sand and rubber on playgrounds should replace asphalt, dirt and grass. Several schools destroyed their playgrounds instead of sticking to them. [3]

The Soviet Union launched the space race with the launch of Sputnik 1 on October 4, 1957. Thirty days later, Sputnik 2 was launched, which was named after a dog Laika was on board. The launches have astonished the US, which sees itself as the world leader in science and technology. The United States then decided to fire their own rockets.

This almost happened on December 6, 1957, when the US attempted to launch the Vanguard 1A rocket. Over 100 reporters and the television were on site to report on the event. The Vanguard 1A barely rose a meter into the air before it lost its energy and collapsed in a fiery fireball – all on live television.

The US immediately became a joker. US journalists used words like "flopnik" and "kaputnik" to describe the incident. The New York Times even dedicated an editorial to criticize the US space program. Since the Soviet Union missed no good opportunity, it offered the US technical assistance to developing countries. The US ignored the offer. [4]

6 The Soviets also planned to destroy the moon

Most people would have heard about the infamous A119 project. It was the US attempt to destroy the moon. Interestingly, the Soviet Union seems to have similar ideas. Both nations had no practical reason to destroy the Moon except to prove that they were the leaders of the space race.

The Soviet Union planned to destroy the Moon immediately after landing. The idea was to put a man on the moon and have him plant a flag. Then they dropped a nuclear weapon to prove that they had landed first on the moon. The lightning and mushroom cloud that formed from the explosion were visible to people watching from the earth. The non-existent atmosphere meant that the mushroom cloud would never form. The blast of the blast would be so brief that the people watching from Earth would not even notice that something had happened. The Soviets later decided to send turtles to the moon instead. [5]

5 Some say the Soviet Union won the space race

The US won the space race when Neil Armstrong and Buzz Aldrin landed on the moon on July 20. However, some observers claim that the Soviet Union is the real winner considering the moon landing was just one of the few new space developments the US has ever achieved. The Soviets reached more milestones than the US has ever been.

Gagarin's flight was followed by another, which had two cosmonauts aboard. This was the first time that two people traveled in space in the same spaceship. In 1963, the Soviets sent their first wife, Valentina Tereshkova, into space. Two years later Alexei Leonov made the first spacewalk.

The Soviet Union was unable to maintain its lead for financial reasons. The state wanted money for more important things like food and houses for its citizens. This threw its space program into descent and it was quickly overtaken by the US. It finally lost after the US landed on the moon. [6]

As the world waited for the launch of Apollo 11, journalists and NASA officials speculated that Buzz Aldrin would be the first man on the moon. This would have been true considering that the astronaut always left the spacecraft first in the right seat of the former twin spacecraft (which replaced Apollo).

Aldrin was in the right seat of the Apollo 11. However, the Apollo's door had been moved to the left. This meant that the man in the left seat – in this case Neil Armstrong – would first get off. Aldrin would have to climb over Armstrong if he ever would be the first man on the moon.

Aldrin has attempted to climb over Armstrong during the trials here on Earth. He was unsuccessful and damaged the test module. Some NASA leaders also said Neil Armstrong should be privileged to step on the moon first because he was the module commander. [7]

3 The US Air Force botched the Space Shuttle

The Space Shuttle was designed to revolutionize space travel. The first spacecraft were disposable rockets. The space shuttle is reusable. NASA boasted that the shuttle would fly cheaper. It has even been predicted that a space flight for $ 20 million per flight will be started by shuttle every week.

The shuttle's maximum range was also limited to a few hundred miles above Earth's atmosphere. Because of this, astronauts never returned to the moon. If that was not bad enough, the shuttle was deadlier than the missile that replaced it. Two of the 134 flights crashed, killing 14 astronauts. That's a bad record for an airplane.

The US Air Force was blamed for the failure of the space shuttle. The original design was perfect until the Luftwaffe demanded a shuttle that could launch US satellites and capture Soviet satellites. This meant that the shuttle needed larger fuel tanks and a larger hold than originally planned.

The Air Force also wanted the shuttle to fly over the poles so they could spy on the Soviet Union. This prompted NASA to build a $ 4 billion launch facility at Vandenberg Air Force Base in California. This device was never used.

The modified Space Shuttle later proved useful for the US space program. It was big enough to launch the Hubble Space Telescope and deliver parts to the International Space Station. The original would never launch the telescope or deliver many parts because it was smaller. It also helped ruin the Soviet space program, as we will discuss below. [8]

While Russia prefers to keep it quiet, the Soviet Union built a space shuttle. The shuttle even looked exactly like an American Space Shuttle. This part was no coincidence, as the Soviets built him on plans stolen by NASA.

The US did not classify the design plans for the space shuttle plans. This allowed NASA to upload them to publicly accessible online databases. All the KGB (the Soviet equivalent of the CIA) had to do was find her, which he did. Their reward was a space shuttle they called Buran.

The Soviets planned to use Buran to dock with the Soviet space station Mir. However, the shuttle flew only once in 1990, before it was abandoned. It never docked with the Mir space station and was decommissioned in 1994.

As mentioned in the previous entry, the Space Shuttle program was expensive for the US. Their impact was even worse for the Soviet Union with their shortage of money. Their space program quickly broke down after spending the little they had on the failed shuttle project. The fact that the Soviet Union collapsed a year later did not help.

The theft of the shuttle plans later proved beneficial for the US when in 1995 a NASA shuttle docked at the Mir space station. The shuttle used the same facilities that the Soviet Union intended for Buran. [9]

] The space race was indeed an arms race

Rockets are dual-use technologies. That means they have both peaceful and military applications. Put a space capsule or a shuttle on it and it will be a spaceship. Replace this capsule with a warhead and you have an ICBM. The space race was a side effect of the atomic arms race between the US and the Soviet Union.

The US and Soviets increased their nuclear weapons programs after the Second World War. At the same time, each nation developed the means to deliver their weapons to the other. The US designed long-range bombers, the Soviets opted for long-range missiles.

These Soviet missiles became useful when the space race came. In fact, they were the reason why the Soviet Union had the upper hand at the beginning of the space race.

The US only took its missile program seriously when the Soviets launched Sputnik 1 in 1957. The start scared President Eisenhower fears the Soviets could use one of the missiles to deliver a warhead to the US mainland. These fears led to the space race. [10]